I have been inspired by reading a blog called Kind Over Matter to make some cards in Scrapblog using my photos and adding interesting phrases and quotes.

My plan is to print several copies of each card (and future cards) and scatter them about in places I feel appropriate while I am out walking.

Along with the cards I will leave a book. Being on the Lifeline Bookfair committee we had many, many books left over from the Bookfair we held in July.

I feel these cards could create a ripple effect as this quote states:
“Remember there’s no such thing as a small act of kindness. Every act creates a ripple with no logical end.” ~ Scott Adams

My first "port of call" will be the park opposite my house. I hope to be able to snap some photos of people picking them up, reading them and taking them home. 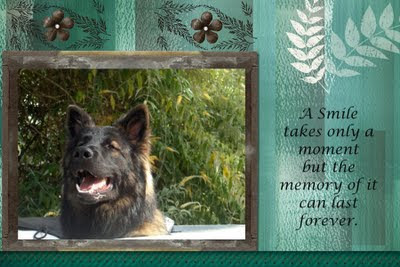 I took this photo in June 2007 in Broome, Western Australia 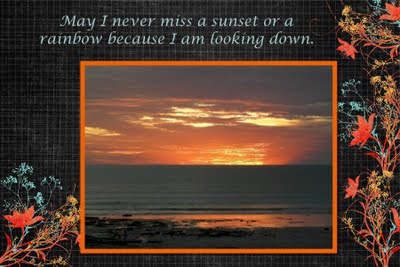 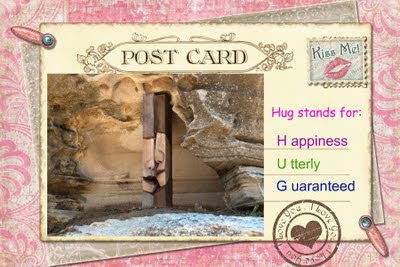 This photo was taken in Rwanda in November 2006 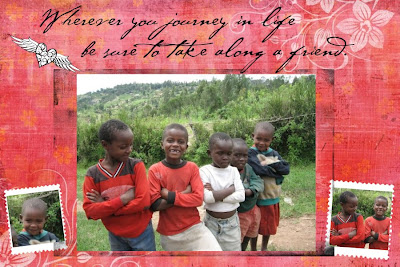 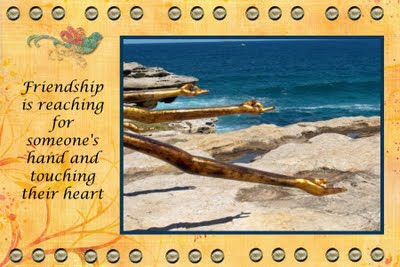 Please join me in this fun project......if you have the time and inclination.

Wonderful. I can't wait to hear the after action report (a term my military minded principal uses.)

I love that dog.

That is a wonderful idea, and sure to touch people's hearts !

That is an angel guided and recived sort of gesture you are doing with these excellent photographs and wise/loving sayings.

Bless you for your ongoing goodness - I will happily adopt the idea and put it into action when I am down by the harbor on my daily walks :)

What a great idea, Peggy! The cards you have created are beautiful, visually and your words. I listen to a woman by the name of Joyce Meyer, a Christian speaker. She is promoting something called "The Love Revolution." Her idea is similar in making cards and leaving them around to brighten people's days...spreading love and goodness through the world! She encourages us to try to make 3 people smile a day! For the grumpy gus, that is a challenge, but a good one!

I love visiting you here. You always have the nicest positive energy and I leave with a smile on my face!
Thank You, Peggy :D

Hugs and Love to You!
Kelly

This is so brilliant Peggy!! How much fun to hide in the bushes and see people pick them up!! I have left crystals at sacred sights (but never stayed to see if anyone found them!) I love this idea of leaving positive messages around - and I certainly have the inclination - but no time at the moment. Your cards are beautiful - and a blessing for anyone to find.

Peggy your photo’s are perfect with your words. You a beautiful person I feel so inspired, not sure I have the time though. Shall see.
sorry the delete was me!

I love your cards and your idea, of course! I can't wait to hear how things go.... You will wait and spy a time or two won't you?!

This also gives me an idea to reward my students more! I quickly thought of random acts of kindness towards them.... but then thought maybe rewarding good behavior might "might" get me farther. Who knows though.... I may let random win out.

Oh, what a wonderful idea and such fantastic act of kindness. Great Post! :)

Hi Pegs :D Just stopped to look at your beautiful cards again! They are so lovely. I LOVE what you are doing :D

Have a Happy Day!

Peggy, I like the "HUG" card. ;)
Now... where are you going to be leaving these? It almost sounds like "littering" (leaving cards and the park)

I can't wait to hear how this turns out, but no matter, what you are doing is fantastic and I am sure many will be touched by your soul's work. I am so busy with my blog every day that I don't find the time for Scrapblog (which seems to take more time). I will have to make some postcards of my own wih images from around the country and inspiring quotes. I am inspired by so many bloggers out there. All the best to you, Tammy

what a beautiful idea. you are so full of love, peg. it's always an inspirational event visiting your blog. you do pursue such a rich existence. i admire you.

How fabulous! If I send you my address, can you send me one? I'd love to have one.

Thank you so much for signing on to follow Kigo of the Kat.

I love this idea! I will have to backtrack to remember the website, but there is a site that is based on leaving books in odd places with a note that encourages them to leave a comment where and when they find it. After the person reads the book, they are encouraged to leave it someplace else with a note and so on and so on. People can track their books and where they end up! Sometimes the books make it to other countries. Your lovely idea reminded me of this. If you don't already know of it, I will try to find out the site and see if it still exists.

You, my dear, are an angel on earth. Too many people spend their time worrying about what others can do for them. You spend your days trying to make others happy. I love that about you.

Namaste, sweet friend. It is such a pleasure to come here to read about your thoughts and experiences.

Oh My! What delightful comments and compliments, I so appreciate your kind thoughts and love.:)

I feel my angels are guiding me where to leave the cards and books.
I have put out about 10 so far and when I have gone back they are no longer there.....which warms my heart.

This weekend I will read a book while I await incognito and see if I can snap of few shots.

Kat - I would love to send you some cards. Please email your postal address.

Debbie - That website I think you are referring to is called Bookcrossing.com

Thanks again, and thanks for your friendship dear friends. You all make me feel so special.

wow what a talent these are really good. If I owned Hallmark I'd offer you a job!!!

Please drop some in the city...people here sure as hell need some of this LIGHT!

Good luck with the card drop and the bookcrossing project. I'll be eagerly awaiting your report of how it went. I hope you only get positive reactions.......but even negative responses could be interesting to record! Don't get arrested!(I'm only joking!)CJ

Yes, bookcrossing is the site! Thank you for refreshing my memory.

How exciting that you went back to some of the spots where you left your cards and books and they were gone. Like dropping a pebble into a pond, your goodness radiates outwards.

I thought of your card drops as I read "Stargirl" tonight. All I can say is that you need to read this delightful little book. It's a quick read.... and I'm thinking you may be the grown-up Stargirl!

Oh I love this idea. I forget where I read it but someone leaves knitted things for people to find to make them smile. How wonderful ! Random acts of kindness... one, ripples to another and another, forever changing the pond, creating energy as it goes..... May your random acts of card giving bring Joy to those that receive and may the ripple you start today resonate across the globe. Blessings to you and yours my friend. Love and Light, Nina P

cool idea! I have a bunch of postcards left over from my postcrossing days.. I might have to try this!

Hi, Peggy. I love your photos, cards and creativity! I may try some in my neck of the woods. Thank you for visiting my musings! i am taking some delightful online explorations with some of the magical gurus at wish studio, maddie mulvaney and susan tuttle: http://inthewishstudio.blogspot.com. i recommend them to you. be well. patti

always love what you do :)
will come back with more time and will, on my way to bed now, love you!
Huggzzz

Peggy, your cards are exquisite! And what a cool idea to place them in the park and then take photos and watch people pick them up and enjoy them! I would love to do this!

I just spent the weekend with a friend from England whose niece does this a lot all on her own. her favorite thing to do is to "decorate" a tree outside a children's health clinic with little tags that each say "Good for one wish". Isn't that just so dear!

I look forward to the follow up photos! xo

I love kind over matter...isn't that such a wonderful blog? I love all the inspiration and the card drops are so so so cool! I need to do that! Love the scrapblogs you have created. Here's to making this world a happier place...

Because you are inspiring. There is a Zombie Chicken award for you here.
http://chapterforty.blogspot.com/2009/10/zombie-chicken-award.html

Once again I appreciate your support and kind words, you are all so delightful and cherished!

Small gestures to strangers or friends can make a difference. Everyday we can be a light onto the world.

As Caroline said "Here's to making the world a happier place".

I haven't managed to snap any photos yet but when I do I will post them on my blog.

This is such a wonderful idea. I can't wait to see the pictures you take.
You inspire me Peggy. xx

Amy I feel we ALL inspire each other here in blogland.
I guess that is one of the reasons we blog. We are teaching and learning at the same time. :)