I should be in bed because I have been on the computer for hours replying to my Scrapblog comments and reading other peoples comments....it is so addictive Scrapblog!
I only joined Scrapblog in November 2007 to brighten up my Broome and Northern Territory photos and I never would have guessed that I would be drawn into the Scrapblog community and make such wonderful friends from all over the world.
I have even met one in person...MrsPeel (Cynthia) and her daughter Sarita who live in London. They very kindly met the train I was on from Paris and drove me to my second cousins house. We had spoken on the phone several times before we met and Cynthia was exactly what I thought she would be....vivacious, kind and very hospitable.

Weather wise this week have been beautiful......sunny but cold.....I am finally getting used to the cold weather.....wearing more layers of clothes helps!

I finally got all my photos printed of the French barging, London and Paris and bought albums to put them in......all 350! If I can stay off the computer for a while I'll be able to put them in those albums!

Also I was given some lovely photos of Joseph and myself at his 2nd birthday party and if I can figure out how to put them on this blog, that will be something else I have learnt.

Philosophy have been brilliant lately, we are right into the meditation part of it now, so very little stress enters into my world.

Joseph jumping into my arms Aug 2008 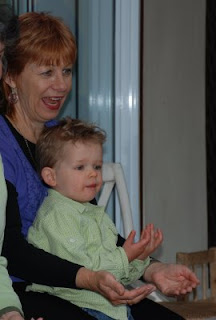 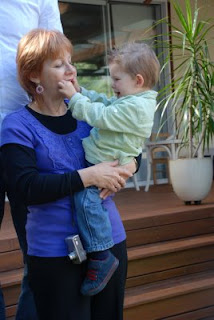 Hello world I have just stepped into the 21st century...........well I have put my big toe in anyway.
It is a cold wet night in Sydney town, the Olympics are on the TV, the cats are on the couch and I'm on the computer........familiar scene for the last couple of weeks.
I am procrastinating about making another Scrapblog........I enjoy looking at the other scrapblogs so much that it is time for bed when I think to start.
Our philosophy class has now moved onto meditation so thats where I should head now and clear my mind and get some sleep.
Posted by miruspeg at 22:23 4 comments: