We're told we're hiding in the shadow of others if we don't "achieve" as much as we could.

Also shadows are said to be where bad people lurk!

But shadows are the essence of something far more meaningful than a reflection of physical form. Shadows are the corners of our mind the light of reason rarely touches.

They offer a window into another world. The world of eternal darkness that all too many of us love to fear.

It was the Chinese Han dynasty that gave us shadow puppets. One of Emperor Wu of Han's concubines died and he was so stricken with grief that he ordered his servants to raise her from the dead, and so, with a lamp and a figure made of donkey leather, they brought her shadow back to life.

Things turn even more eerie when it comes to shadow people. These are dark figures that are said to inhabit our peripheral vision (accompanied by a feeling of terrible dread) only to vanish if you try to look at them directly.

But these metaphors of fear hide a much more relaxing and wonderful truth.

Those dark corners of the mind are not full of fear and woe, but are the first steps on the path of truth if we allow ourselves to find out more about them.

"Find beauty not only in the thing itself but in the pattern of the shadows, the light and dark which that thing provides".
~~ Junichiro Tanizaki

"Thoughts are the shadows of our feelings - always darker, emptier and simpler".
~~ Friedrich Nietzsche


Holidaying in Broome, Western Australia in May 2007 we went on a camel ride along Cable Beach. The sun was setting and I took this photo while up on the camel. How often do you find when decisions are being made, our want-selves take over and we do things that ignore the ethical implications of our actions.

Psychologists say we have different systems for wanting things and liking things. So some of the stuff we really want, and spend a lot of time pursuing, doesn't give us as much satisfaction as we thought it would once we've got it.

This explains why children will spend weeks nagging parents to buy them a guitar or a pet but quickly lose interest once they have it.

One of the most ubiquitous problems in daily life is achieving self-control.

We need to control our natural urges to eat too much, to smoke, to drink too much, to gamble too much, spend too much, watch too much television, get too little exercise and even to work too much.

We have trouble controlling ourselves in circumstances where the benefits are immediate and certain, whereas the costs are longer-term and uncertain.

When we come home tired from work, for instance, the benefits of slumping in front of the telly are immediate, whereas the costs - feeling tired the next day; looking back on our life and realising we could have done a lot better if we had got off our backside and played a bit of sport, sought a further qualification at tech, spent more time talking to our partner/children/friends etc - are not so clear-cut.

Similarly, the reward from eating food is instant whereas the costs of overeating are uncertain and far off: being regarded as physically unattractive, becoming obese, becoming a diabetic, dying younger, etc.

As everyone who has tried to diet, give up smoking, control their drinking, save or get on top of their credit card debt knows, it's hard to achieve the self-control our conscious, future-selves want us to achieve.

"The hardest thing to learn in life is which bridge to cross and which to burn."
~~ David Russell

Sculpture by the Sea, Bondi, Sydney, Nov 2011. The artist Peter Tilley called this "Domestic Bliss" and his statement said:
"Contemplating the next move in an ordinary domestic situation". 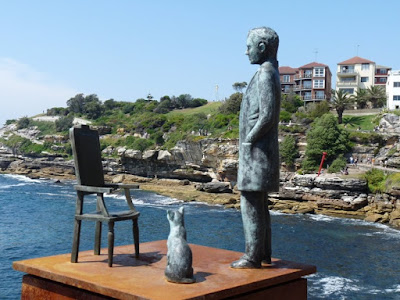 Labels: decisions, minds, muddled, should self, want self 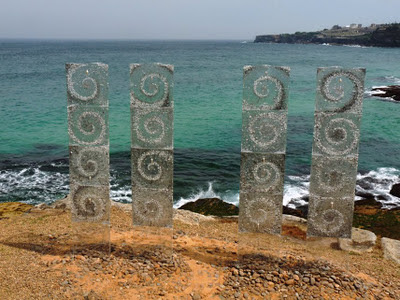 Please join me and 3 of my close friends in sending light and love into the Universe....especially at 11:11am. By opening our energy centres to earth and sky we can become light conductors.

I believe the use of Light was once (or many times in our history) a very important component of everyday life, and that with time its knowledge has been lost and found time and time again.

Being a Lightworker is not a special dispensation reserved for just a few....we are ALL potentially Lightworkers.

So Lightworkers Unite. Our world could certainly use an abundance of light, love and peace.


Above photo taken at Sculpture by the Sea, Bondi on 8th November 2011. The artist, Alison Lee Cousland called it 11:11! Her statement about the sculpture said:
"All places on our planet are unique and special. As 'inner sacredness' is activated, we come to recognise a sacred place as if for the first time. 11:11, a universal gateway, dedicated to world peace. Releasing the past. Being grounded in the present. Welcoming the future"

My friend Stoneweaver, who is visiting from New Zealand, and I spent a wonderful day admiring the beautiful sculptures as we meandered from Bondi Beach to Tamarama Beach and back again.


"In every phenomenon the beginning remains always the most notable moment."
~~ Thomas Carlyle
Posted by miruspeg at 23:11 7 comments:

John Lennon - Nobody Told Me