“The future will belong to the nature-smart....those individuals, families, businesses, and political leaders who develop a deeper understanding of the transformative power of the natural world and who balance the virtual with the real. The more high-tech we become, the more nature we need.”

For most people in their 50s and 60s, memories of childhood are wrapped up with nature: visits to farms owned by friends or relatives; days spent poking around the creeks or fields that intersected the suburbs; a tree house assembled by an unsupervised crew of 10-year-olds in nearby bush, mostly using materials pinched from home.

In just one generation, Louv argues, this easy access to nature has largely disappeared. This matters in all sorts of ways. Louv cites the recent leap in the incidence of short-sightedness. According to a 2008 Australian study, 12-year-olds with the lowest levels of outdoor activity were two to three times more likely to develop myopia. The reason: their eyes have not been exercised by focusing on a distant horizon.

There's something unbelievably sad about a childhood without far horizons: not only the missing eye exercise, but the missing daydreaming and hike planning, the urge to both wander and wonder that comes with the sight of a distant horizon.

According to Louv, time in nature also reduces anxiety by giving us perspective on our problems.

I remember childhood conflicts, with either parents or friends, and how I would take off from home and go walking in the bush and climb a tree so I could look out. Suddenly I was calmer and no longer felt caught in the centre of a storm.

Instead of this time in nature, many people - both young and old - now spend time with social media. Social media, of course, has many good points, especially the way it allows us to form communities outside the limitations of what's on offer in our own neighbourhood, office or school.

It strikes me, though, that social media also involves experiences that are exactly the opposite to what I found in nature.

No wonder so many of us are anxious.

Facebook and Twitter create a sense that we're at the centre of a Universe of our own creation - we're the planet around which everything swirls: our friends, our tastes, our hobbies.

They don't call them iPads and iPhones for nothing.

Even the name Facebook suggests a mirror into which we gaze at our own reflection. There can be power in that, I guess; the self-esteem of "likes" and "retweets", friendship requests and extra "followers". Yet, as every teenager knows, ego always seems to travel hand-in-hand with self-doubt, and time spent staring appreciatively into the mirror almost always turns sour.

So remember the antidote and the cure lies just an hour or two north, or south, or east, or west of where you are sitting right now.

It waits. The sky so bright it hurts your eyes. The eucalypt leaves glinting like silver.

These two photos below were taken on 1st September 2012 when a girlfriend and myself spent 4 hours wandering through Piles Creek reserve in the Brisbane Water National Park (about an hours drive north of Sydney). 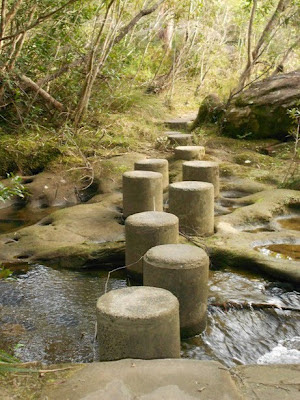 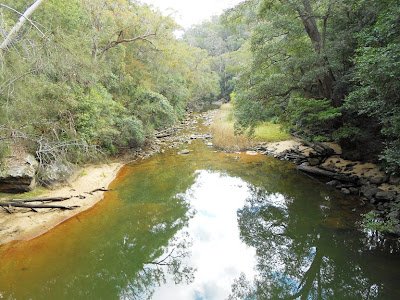