Putting It Out There!

I'm a firm believer in the power of the written word.  It’s a form of “putting it out there” to the Universe.


“The pen is mightier than the sword”.........at least so says English author Edward Bulwer-Lytton in 1839.  But this is the twenty-first century – not the nineteenth, and times have radically changed. Today most people’s writing involves e-mails, text messages, twittering, Facebook and the like; lots of touching base but little true writing.
So in these days we might ask afresh, Is the pen still mightier than the sword?  Should the written word still be considered a powerful weapon in the modern culture in which we live?
The effort of putting pen to paper (metaphorically speaking) is considerable.  Every article we write may not have a powerful result, but it could!
It can be pervasive.

It can permeates lives, penetrating where spoken words would be shut out.
One of the reasons for this is that there is an implied acceptance when we choose to pick up something to read.  In essence, we have given it the right to speak into our lives.

Because of this, an article can often penetrate a resistant heart, for just the action of choosing to read it opens the door to the truth it contains.
The pervasive power of writing also comes from the fact that, since written words easily endure, they often make it to places we would never dream.
So let the writing begin!

“A drop of ink may make a million think.”
~~George Gordon Byron

I found this fabulous picture on Pinterest.......my latest addiction! 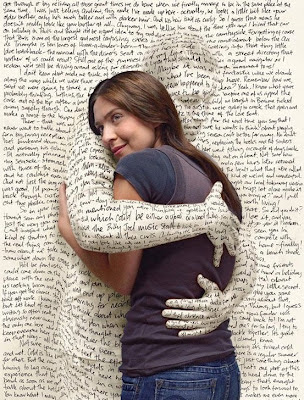