I hope this beautiful video, Namaste, a word derived from Sanskrit, which is part of the Philosophy I have been studying for the past two years, touches you as it did me.

A special thanks to Caroline over at The Zen In You, for putting this word in her 'Leave your comments' box. It is a beautiful greeting. Taken literally, it means "I bow to you".


I was very pleased to read in an article about Hugh Jackman, the quintessential man from Oz, that for the past 20 years, wherever he has been in the world, he has attended a class every week at the School of Practical Philosophy.

The School of Practical Philosophy is a worldwide movement devoted to the study of religious and philosophical ideas drawn from sources as varied as Christianity and Hinduism, ancient Greece and Shakespeare, and how those ideas, those "natural laws governing humanity", can be applied to everyday life.

The School grew out of London's School of Economic Science, founded in 1937 in the wake of the Depression. Meditation is central to its practice.


Photo taken in Kenya, December 2006 where we spent 2 glorious weeks on safari after our journey to Rwanda - Namaste 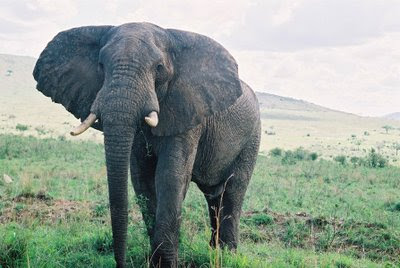 I was once told a silent namaste told before meeting each before would change your life and every interaction. I have not been able to do so everyday i must admit. Indeed perhaps the most noble of human gesture.

Happy holidays to you.

When did you go on your safari? How fun is that! Love the pic of the elephant, how I enjoy watching them.

This is just a beautiful word Peggy. It's a word I've heard, and known the meaning to. Yet, seeing the video just added a whole new dimension to really how sweet a word this is, how connected we all really are... Thank you, really, for sharing this video, and being a light in this world, spreading much goodness...

What a beautiful video, Peggy!!

Namaste, for us in India, is the absolute norm of greeting others, especially elders. I am glad you are so touched by it. Let's make a deal now. At least you & I will definitely greet each other from now on with a 'namaste', ok?

I pray & hope that it shall make our bond even more strong :)

Peggy, just wanted to take this opportunity to tell you that your presence somehow makes me feel so much better. I may not have seen you personally or talked to you ever but still, I feel so connected to you. There's definitely something there..Some soul connection.

God Bless You Always,
With all my Love,
Meow

Sherer, Monica, Lance & Meow you are all beautiful, special people.
May we always be able to recognise this special place in ourselves and each other.

We are one, but we are many.
We share a dream and sing with one voice.

Namaste. I am giving you a new award. Please come see it at my site. You to me epitomize this award.
Annemarie

Thanks for the shout out Peggy! I love the word Namaste...so powerful. I use this instead of Amen when I end my prayers. The video is just beautiful and left me feeling so good. What a wonderful post today!

You know how google combined your G+ circled friends in your search results? (you can turn it off)
So I did a search on "namaste" for a post today. This post along with your G+ id popped up at the top of results.