We need to move past myths about e-language that the physical constraints of the new media will inevitably diminish our appetite for sustained text and thought.

Emails, Facebook, Text messages, Twitter, YouTube, some experts argue threaten to infantilise the brain. Some also say that social media is used at the expense of all other forms.

In other words, if the words, if the electronic uprising excludes other writing completely, we probably would be left thinking in short snatches.

But that is akin to saying that if the only sport we played was football, then no one would be good at tennis.....that's a big and unlikely "if".

These arguments remind me of the moral panic that has beset every new form of communication. People claimed the printing press was the devil's tool because it could disseminate lies. The telephone was going to cause family breakdown because we would stop talking to each other in person.

Now social media will deteriorate our brains because we are going to abandon all other forms of writing!

Writing in the new media is not a replacement but an addition to traditional genres. Much of it is a hybrid form somewhere between speech and formal writing.

It means kids are, in fact, doing a lot more writing and mastering a much wider range of styles.


These bookends have been part of my life for many decades. I am sure books aren't going anywhere anytime soon. 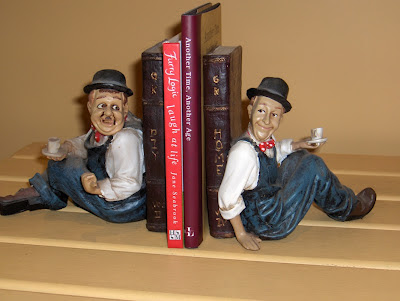