The Jacaranda Tree and the Power Lines

November in Sydney is a picturesque time because of the Jacaranda Tree.

Streets are awash with the magnificent purple-blue blooms of Jacarandas as they put on a breathtaking floral display, later falling to the earth carpeting the ground with a mass of colour.

It is said that if you are walking underneath the Jacaranda tree and one of the trumpet blossoms falls on your head you will be favoured by fortune.

I found one such tree in Willoughby, the next suburb from my house, when I was driving home the other day, and to my astonishment it was living in harmony with power lines.

I was genuinely awestruck by its beauty and marvelled that even though it had been hacked over the years to accommodate the power lines it had won the battle and now lives in harmony with the power lines.

"If I were to name the three most precious resources of life, I would say books, friends and nature; and the greatest of these, at least the most constant and always at hand, is nature."
~~  John Burroughs 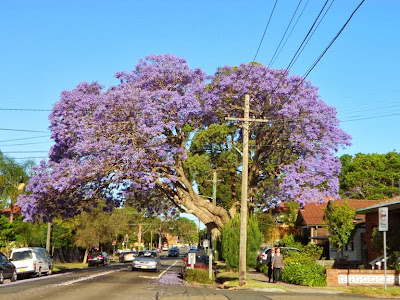 Posted by miruspeg at 20:33 9 comments: Links to this post